So, the last show of the year and one I had never been to before. This is one of the oldest regular shows in the country and I remember friends of mine in Portsmouth and London talking about going to it many, many years ago.

Unlike many of the current shows, where it is wall-to-wall trade stands broken up with occasional demonstration and participation games, this has a central trade area and then a series of large rooms around the periphery full of people playing games. It runs from the morning right up to midnight allowing people to play full games.

I drove down from Wales with the memsahib on Friday and stayed with Charles at his Home Counties retreat. Then on Saturday, after a breakfast involving lashings of tea and marmalade, we took the steam locomotive into the Capital. It was third Saturday before Christmas – so enough said about the state of town… The memsahib, her eyes alight with the many retail opportunities left us for Oxford Street.

Debarking from the Tube at Earls Court we took a leisurely stroll along the Victorian terraces and crescents into West Brompton where we came across an interesting and extensive cemetery. Resisting the temptation to dash about recreating an engagement between Lord Curr and Count von Stroheim we made our way past the grand exhibition halls of Earls Court and onto the hotel whence Dragonmeet was housed.

Having spent the last two years visiting a number of cavernous venues where various shows had been held it was surprise to behold a low ceilinged hall with carpet underfoot. We arrived an hour after opening so there was no queue and the welcome from the organisers was cheery and efficient.

Inside we soon found that this event is mostly focused on roleplaying and board games, of which there were a great variety. It must be said that the budget spent on the artwork and marketing of roleplaying games far exceeds that of the average wargame and many of the stands were very attractive indeed. It was nice to see several games being marketed by French and Spanish companies. As we wargamers have found in recent years the professionalism, artistry and creativity of our Continental cousins can be quite remarkable.

There were a few of the Nottingham Wargames Mafia in attendance; Forgeworld, Bolt Action and North Star all having stands. Though I am not sure how much business they did. There was lots of browsing but I observed fewer purchases than I would expect at a purely wargames show. I hope that they covered their costs.

One of the things that was immediately apparent at Dragonmeet was that next to almost every trade stand was a small table or two where people could play the games on offer, manned by enthusiastic staff.

So onto our mission. We quickly found the North Star stand and the participation game table. It was a small but very attractive affair as you can see from the photos below. A motley band of Communards defending a barricade against a small, but ruthless team of Prussian Jägers supported by the evil Dr Kobalt created a simple mission just right to introduce new people to the game. The buildings are the new 4Ground medieval village/town buildings and they were both robust and gorgeous. 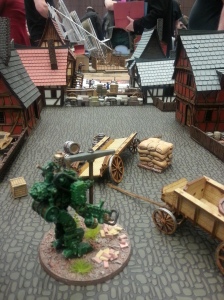 Karl Tebbutt has been demonstrating IHMN ever since it was launched at Salute in 2013. He still wears the ‘Feeling Plucky Sir’ T-shirt we gave him that year. His knowledge of the rules outstrips mine, and his open and welcoming attitude has brought many a chap into the IHMN family. He is to be commended for this effort – well done Sir!

On the same table was also a set-up for Dead Man’s Hand by Great Escape Games. Again the 4Ground buildings were excellent. One of the writers of said game was manning the North Star stand with Gen. Eyre and we had a long and very useful conversation with him regarding the many pitfalls and triumphs of small game production and publishing. I wish I could remember the chap’s name but my aging memory has failed me (the memsahib calls it ‘inattention’).

We also met those creative gentlemen from Gripping Beast, the authors of Saga. It is nice getting know such people as we become more established in the British wargames’ scene. They have all been remarkably welcoming and helpful to us, something which we did not expect as we regard ourselves to be brash newcomers.

Something the chap from Great Escape Games said stuck in my memory. He had noted, from his long experience of such shows, that wargamers tend to have small rucksacks on their backs, whereas roleplayers seem to prefer messenger bags slung over their shoulders. It seemed accurate, especially as several of the people who sat to play IHMN with Karl all bore rucksacks… Charles, of course, was carrying a rucksack 🙂

Something I noticed was that the average gamer seems to be middle-aged, rotund, bespectacled with a receding hairline and sports a goatee beard. In other words I fitted in perfectly.

The news from Gen. Eyre is that IHMN and its supplements continue to sell well. This is welcome news as you can imagine, and reflects what we have seen on the Facebook group and the IHMN Blog, with a steady stream of new ‘followers’ joining or subscribing. It is becoming what Nick calls ‘the standard’ in its niche.

Overall the show was quite congested, a testament to its popularity, but also as a result of it location. I could not have played in one of the roleplaying table rooms, far too crowded and noisy. Getting around the trade stands required considerable patience and some agility. I think the most common phrases used by one and all during the day were ‘excuse me’ and ‘sorry’.

Given the very small wargaming presence and the cost of attending (fuel down from Wales and the cost of rail and tube fares into town, as well as food etc.) I cannot see us going to Dragonmeet again. Our next London show shall be Salute 2015 where we hope to be running participation games of Daishō.

What we took from the show were the conversations we had with numerous people from the industry. We reflected upon these on Sunday and they have helped us refine and agree our plans for the future. We shall reveal these as time goes by, so watch this space.

NB: Don’t forget to vote in the Beasts of War Annual Awards. IHMN is in the Pulp, Punk, Weird & Horror Category.